Yesterday marked the 87th annual Academy Awards and it did not disappoint! The Oscar's were in full effect this year with a slew of amazing movies that all deserve acknowledgement of excellence. Hollywood is always glamorous and yesterday's production was a really great way to acknowledge and honor the nominated films, actors, directors, and crew.

The fashion this year really blew me away...when you see an actress wearing a gown and you just immediately think, "Now, she's a movie star", you know the fashion had to be out of this world. I had a hard time choosing my top three best dressed actresses this year. On some actresses, I loved the dresses but didn't like the styling or hair and makeup. My top three best dressed this year were my favorite head to toe looks...

Neil Patrick Harris hosted the show this year, and he was okay but I thought he had a hard time topping Ellen last year. I liked the opening musical number but and his jokes and winner predictions fell a little flat. His jokes were typical "dad" jokes. He tried though! I always think Neil and his husband David Burtka are so cute together and when they showed up on the carpet, that thought was reinforced in me. How could you not love them?!

I watched all the Best Picture nominated movies this year, as I have been trying to do since 2013. I loved them all and definitely had my front runners for winners. I was pleased with the outcome of some and disappointed in some others. Let's talk...

1. Common and John Legend's performance of and win for Glory, Best Original Song. This performance brought tears to people's eyes, including Chris Pine and David Oyelowo and introduced Civil Rights issues that are still relevant in America today, like how more black people are incarcerated today than were slaves in the 1800s. The performance stage was set under a replica of the Edmund Pettus Bridge and really moving.

3. That Best Foreign Language Film winner who would not stop giving his speech. Is he still there by the way?


5. Graham Moore's speech when winning Best Adapted Screenplay for The Imitation Game. Growing up weird myself, this speech really spoke to me and I'm sure to millions of others as well. 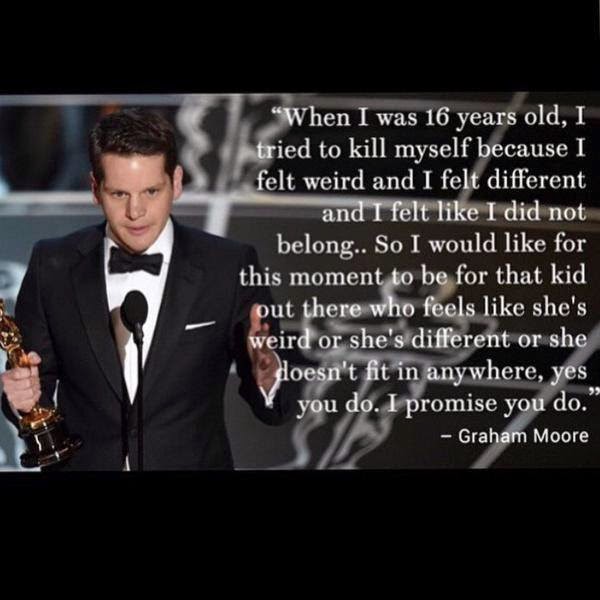 6. Finally, in all seriousness, the speech that Patricia Arquette gave after her win for Best Supporting Actress was truly the speech to listen to at the Academy Awards. She called for wage equality among men and women and got a standing ovation from many of her peers in the audience. "It's our time to have wage equality, once and for all, and equal rights for women in the United States of America," she exclaimed. And she's absolutely right. If you missed her speech, its a must watch...

And that's my wrap up of the Oscars this year! I'm happy that each of the nominees for Best Picture one at least one Oscar. All in all, I was really impressed. As always, I was blown away by the fashion and very supportive of the winners. What are everyone else's thoughts on the 2015 Academy Awards?
Posted by taltalsays&chardonnay at 1:47 AM