Since it's the beginning of the year, I really wanted to start fresh and just get rid of the clutter in my life. There are so many things that can be cleaned up and organized, which changes the complete feng shui of your life. Trust me on this, guys...with a life free of clutter, you make room in your life to allow other positive energies to flow in.

For the past 2 weeks, I've been doing a complete overhaul on all my stuff. Cleaning out things that are unnecessary in my life and throwing them out is very therapeutic and I want to share this experience with you all so you can de-clutter too.

Here are some essential cleanses you can do to start of 2016 right... 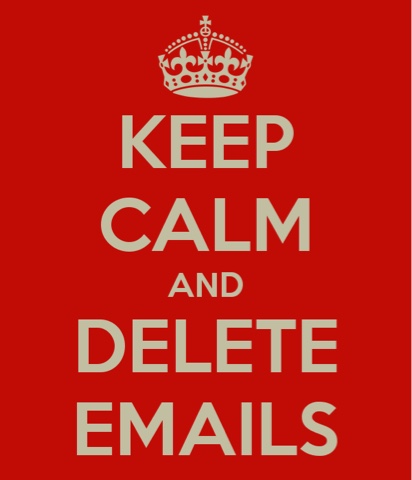 Delete old emails that you no longer need, like receipts from things you've bought and won't return. Create folders to organize the other needed emails. Don't leave any unneeded emails in your inbox. 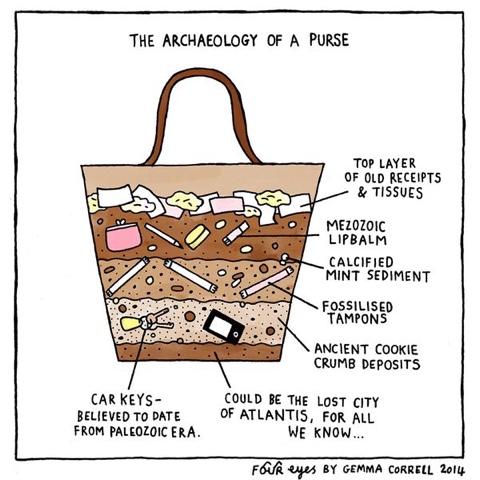 For the love of god toss out old papers, gum wrappers, and old makeup out of your bags! You might even find some treasures you've been looking for. 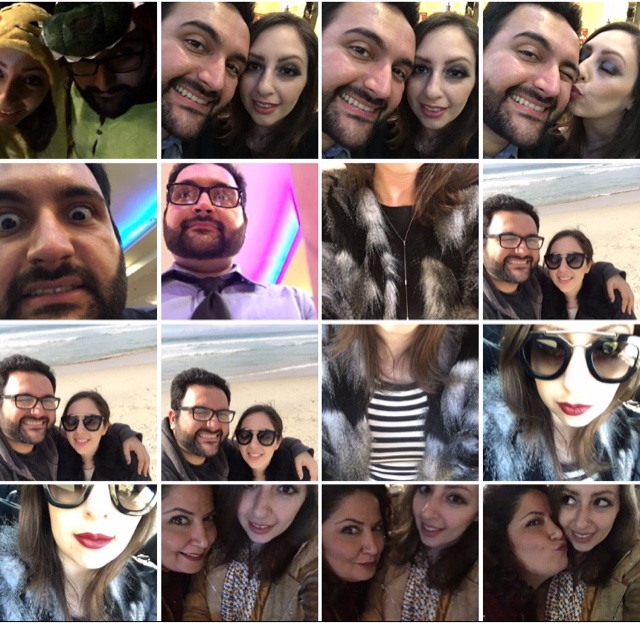 Let's face it, you took 20 selfies to get the perfect one. You don't need the rest now! Get rid of them and make space in your phone for your next selfie photo shoot. 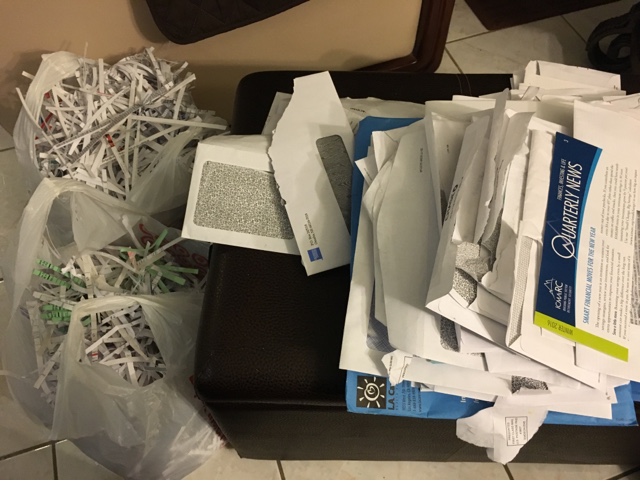 Ever stack up all your junk mail and other papers, stick them in a corner, and forget about them? Time to get rid of those. Invest in a shredder and shred those papers that you no longer need. Don't forget to recycle! 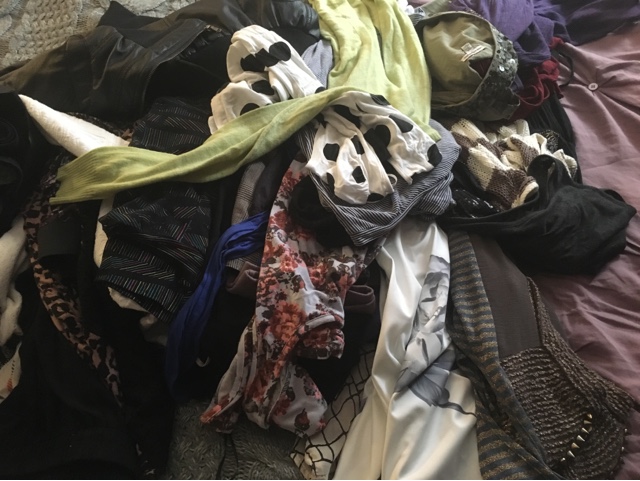 If you haven't worn something in your closet in over a year, it's time to throw it out. H&M has a really good incentive of 20% off when you donate a bag of clothes. There's always Goodwill and other charities too.

6. Invest in a calendar you enjoy looking at. 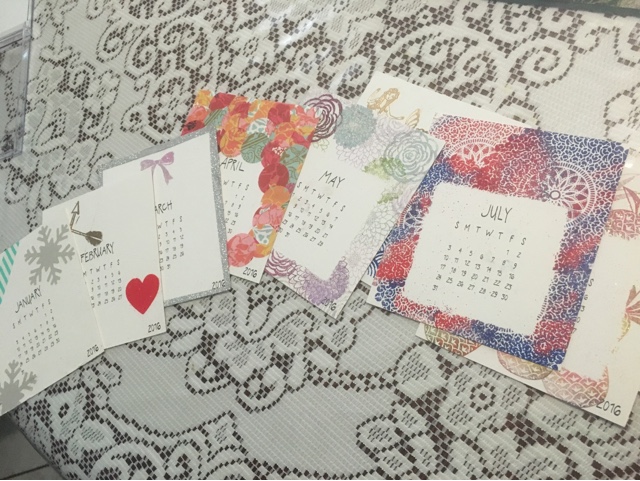 Sometimes I get stressed out just looking at my calendar and seeing all the things I need to do. I find that having a calendar that's appealing to the eyes lowers my anxiety. Invest in a cute calendar. I made this one at a craft class at Paper Source.

In general, cleanse yourself from clutter and negativity this year and see if positive energy doesn't come your way. To make room for a different energy, you need to get rid of old ones. Here's hoping to a stress free, de-cluttered, and positive 2016!
Posted by taltalsays&chardonnay at 3:45 PM No comments:

I wanted to share some of my holiday highlights with you all in hopes that it will inspire you for next year or even for any other holiday throughout the year!

I want to start off with my favorite gifts of the season. These are my top gifts I received this year. They're gifts that are really desirable and make great presents that a lot of girls will love. Valentine's Day is coming up, so these might be good things to keep in mind! Shop the items via links below...


Next, I want to inspire you all to give baking a try and cultivate holiday flavors into your baked goods. I love making oatmeal walnut cranberry cookies! As you know, I always happily share my recipes, but this recipe is my little holiday secret :X 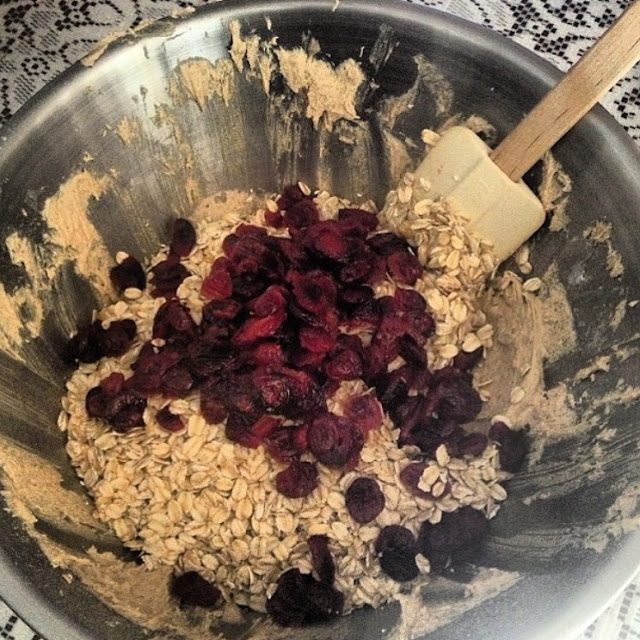 I loved seeing holiday lights at the LA Zoo this year too. It was very festive and my favorite part was the twinkling LED light canopy above a long, beautiful walkway. 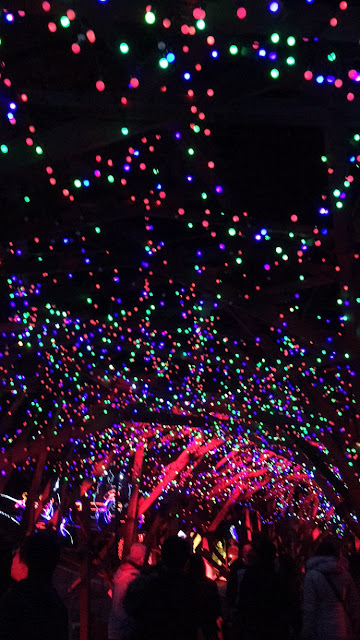 Finally, I hope you all had fun celebrating the beginning of the New Year and I hope this year for everyone that all your pain be champagne! 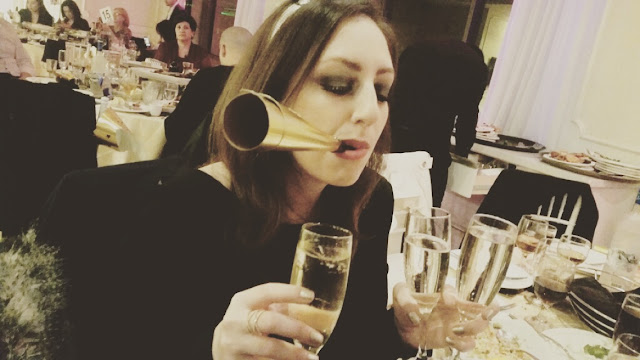 Posted by taltalsays&chardonnay at 3:22 PM No comments:

A few weeks ago, I hustled down to Melrose to check out a really cool Seinfeld pop up exhibit, so since I was already there, I decided to eat dinner at one of the trendy spots around the area. I came across this really cute French bistro type place called Zinque and fell in love with it.

I started off with a Rose from Provence. I tend to like my wines on the dry side, but this wine was actually very delicious and paired well with everything else I ordered. My boyfriend, the beer lover, was pleasantly shocked to see his favorite beer, Delirium, on tap! 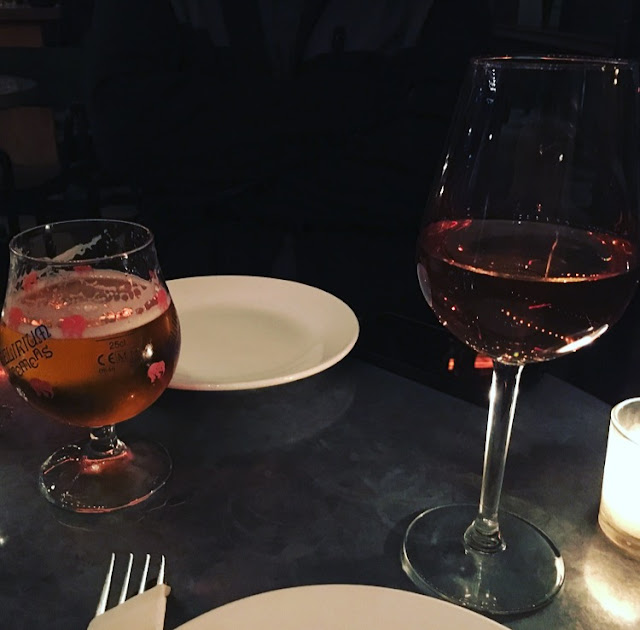 We started with the Ahi Tuna Tartare with Pesto as an appetizer. The fish was really fresh and it tasted really good with the pesto and fresh parmesan shavings on top. But the best part of this dish was the bread all the tartare was placed on. If you've been to Paris or know anything about French pastries, you know Polaine and Polaine is the best of the best when it comes to bread. Zinque ships out Polaine bread from Paris and it really brings the whole dish together. I honestly don't know how I will go back to eating bread from the grocery store after I had the bread here. 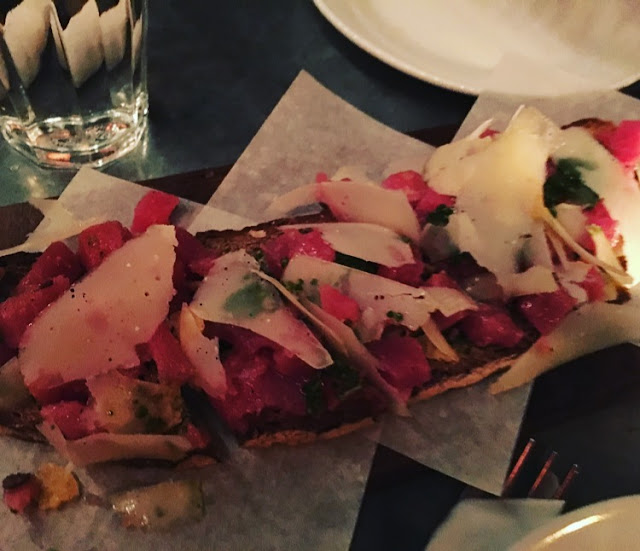 Next was a Quiche Lorraine. This quiche is named after a region in France and had pancetta and Gruyere cheese. It was absolutely divine. It came with scalloped potatoes with more cheese on them...I mean, can you get more French than that? 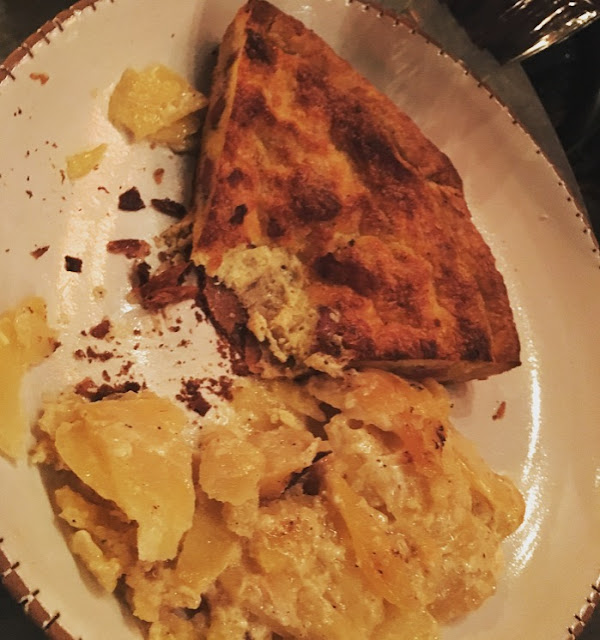 Because I clearly did not have enough cheese in this meal, I also ordered Baked Camembert Cheese. Baking a soft cheese and getting it all warm and gooey takes a cheese to a whole other level, let me tell you. It's really a must have. It was served with a drizzle of honey on top of the cheese, Marcona almonds, grapes, and wheat bread. 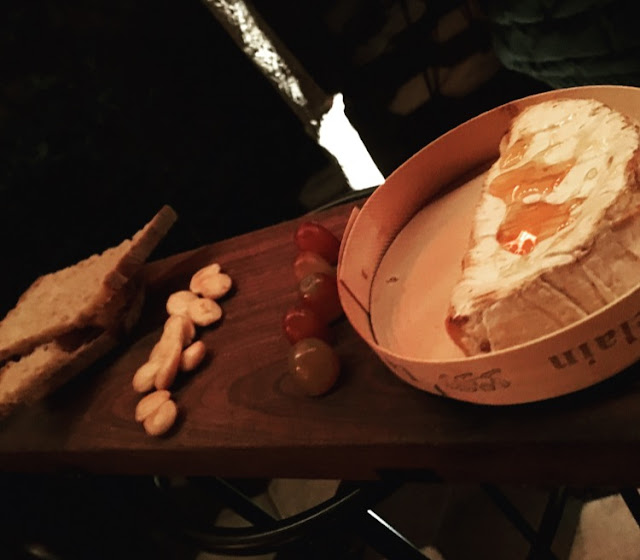 What's a French meal without dessert? I was so full, but I knew I couldn't pass up dessert. Hence this glorious Banana Bread with French Vanilla ice cream. The banana bread was warm and soft and the ice cream on top was just the perfect addition to it. I just love when ice cream slowly melts on top of a warm dessert. Don't make the mistake of not ordering this. 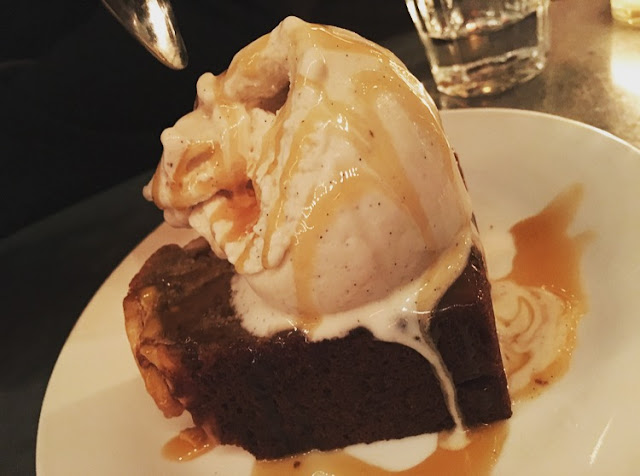 I love checking out new restaurants and bars wherever I go, but I think I will definitely be back here in the future! If only for that Polaine bread :)
Posted by taltalsays&chardonnay at 7:57 PM No comments:

In LA, there are a bunch of beautiful museums to visit where you can see art, look back on history, or learn about a new culture. I've visited a lot of them, but when I heard there was a brand spanking new contemporary art museum opening in Downtown LA, I knew I had to check it out. Especially since entry into the museum is free!

Before opening, the museum teased everyone with its beautiful architecture of the building. It's a super modern look that looks almost like a mesh net(?)...that's what I thought of it anyway! 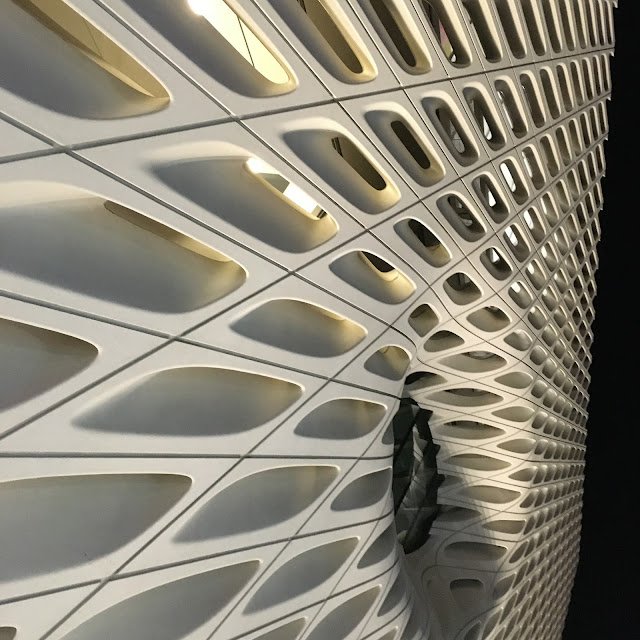 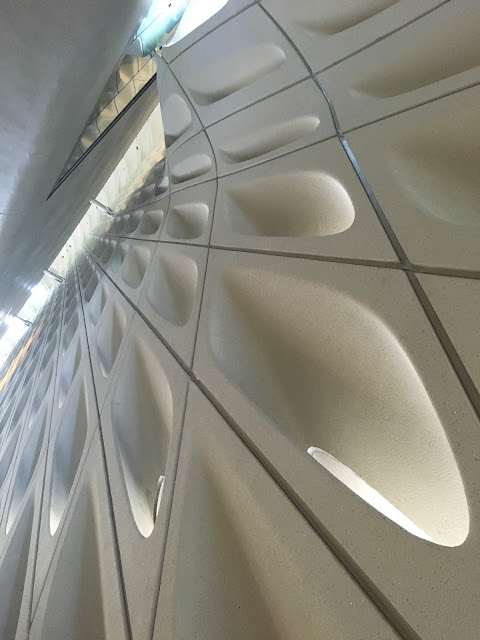 Upon walking inside, we were instantly greeted with this interesting piece, resembling a stack of plates by Robert Therrien. 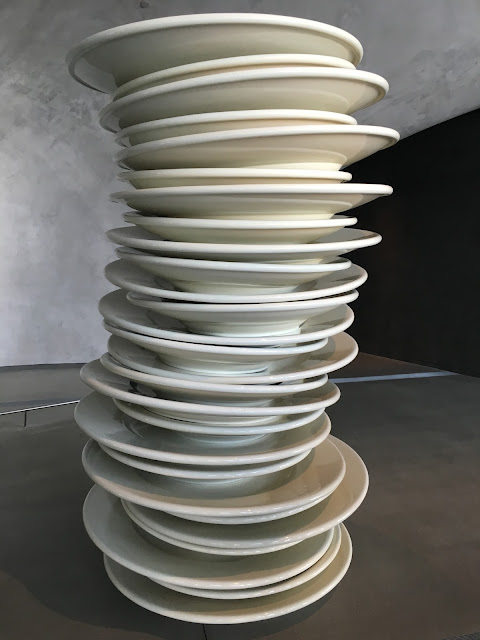 Moving over to the left, was this lamp that looks like its sort of melting. This reminded me so much of a prop straight out of a Tim Burton movie. 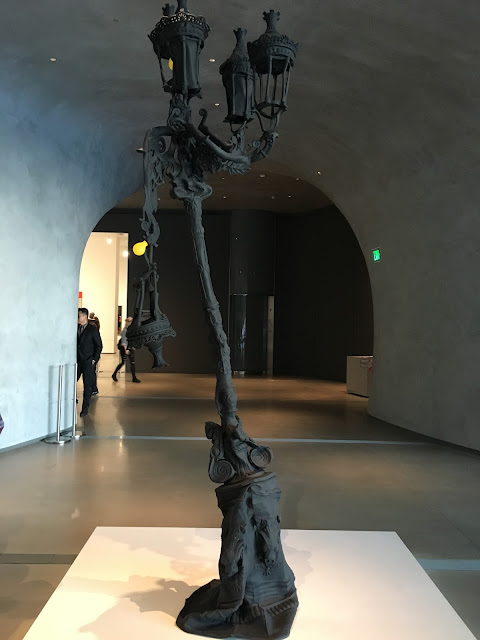 All the art in this museum was very modern, which I actually really like. I think it allows the audience to use their imagination to delve into the deeper meaning of what the piece is trying to convey. Noting the date and location the artists created the pieces also influences the interpretations of the artwork, so I always make a note to read the placards next to them.

My favorite room by far was the Takashi Murakami Room! Murakami uses his Japanese heritage and American pop culture to influence his works. His art spills into fashion and film as well and has been compared to Andy Warhol. 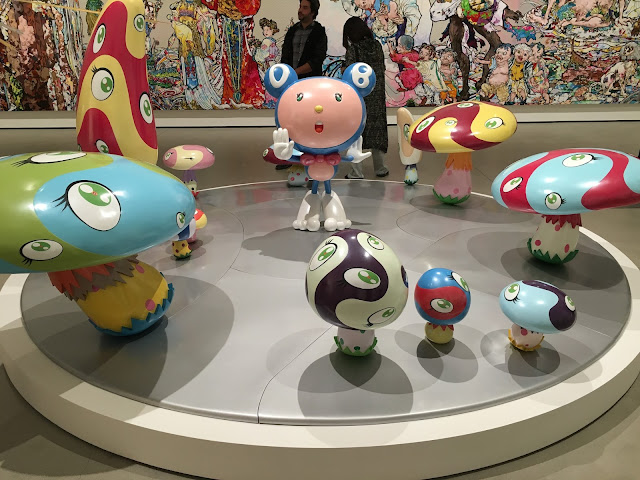 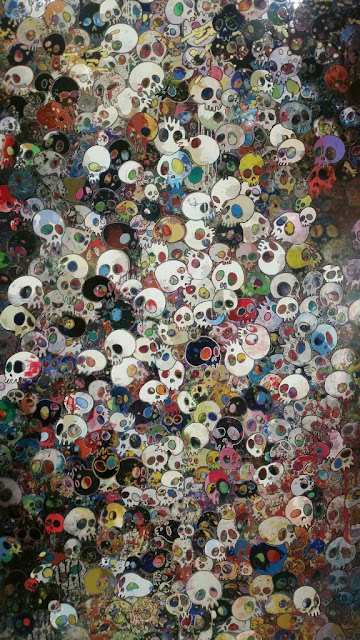 I also really loved a video piece by Ragnar Kjartansson. I couldn't get any footage of it, just because it wouldn't have done it any justice, really. The piece was a looping video of a group of musicians who rented a dreary cabin in upstate New York. Each musician was set in a different room of the mansion each with different instruments and they all sang and played the same song from their respective rooms. Videos were taken of each room and displayed separately, but became harmonious when they were all played at the same time. This exhibit was totally worth seeing, I would even recommend it before the infamous Infinity Room!

We came across some very random but interesting pieces throughout, like this Double America by Glenn Ligon. 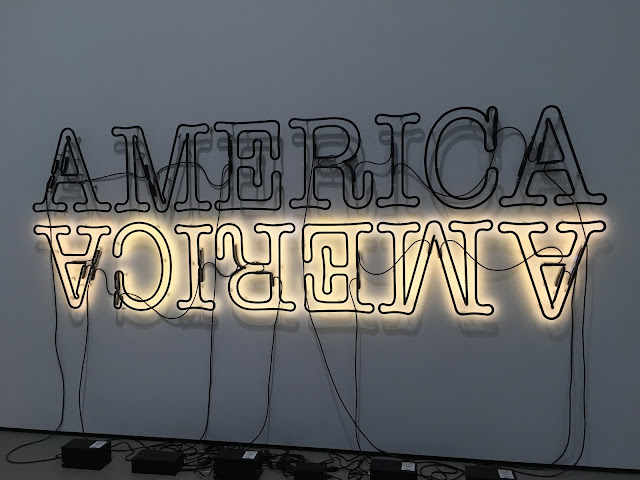 My boyfriend even found some height competition with this Charles Ray number. 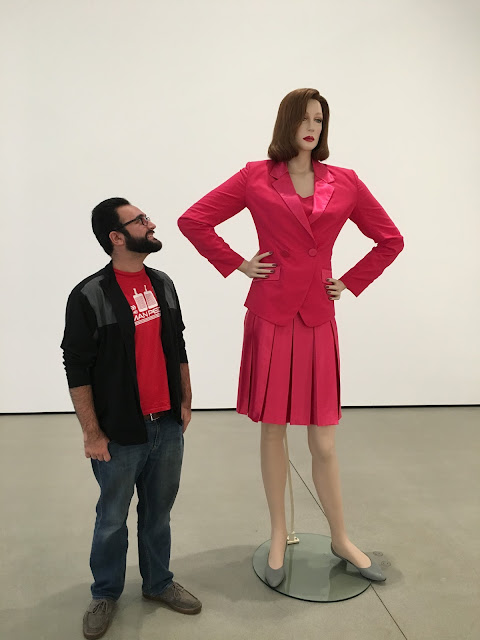 I was feeling a little tiny standing next to this Robert Therrien piece. 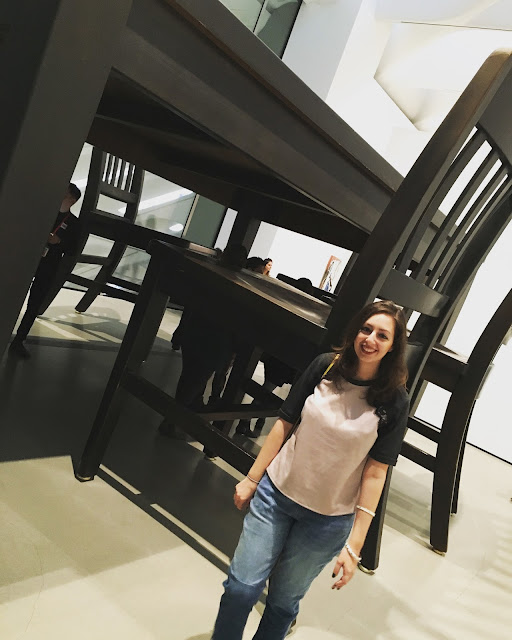 There were even some Jeff Koons works like these basketballs. 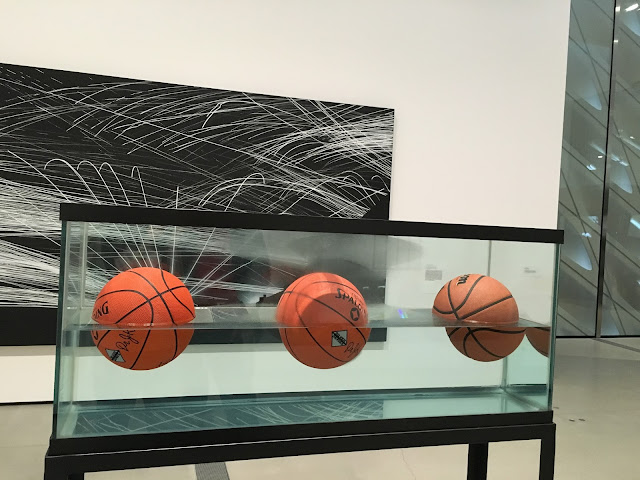 I loved seeing some Roy Lichtenstein artwork as well! 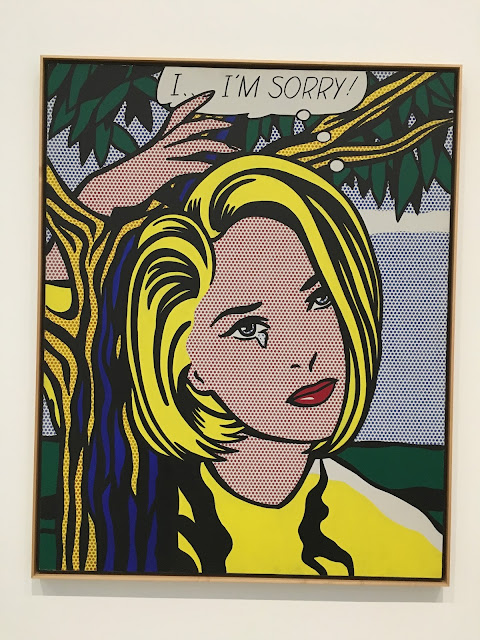 Finally, we saw the infamous Infinity Room! Note that when you go to the Broad, come early and make a reservation to see this! Since everything is free, the museum has to track the number of visitors in the most popular exhibit so by the time we arrived, the reservations for the room were filled and we had to go on a standby list and we couldn't see it until 8:30pm. But it was totally worth the wait (kind of). We had (a full) 15 seconds in the room where you stand on a platform surrounded by water below you and mirrors on the walls. Lights are projected in there to reflect on the water and the mirrors. It really looks like you are in a room of infinite sparkle. My favorite part of it was looking down below me...it felt like I was floating in space! 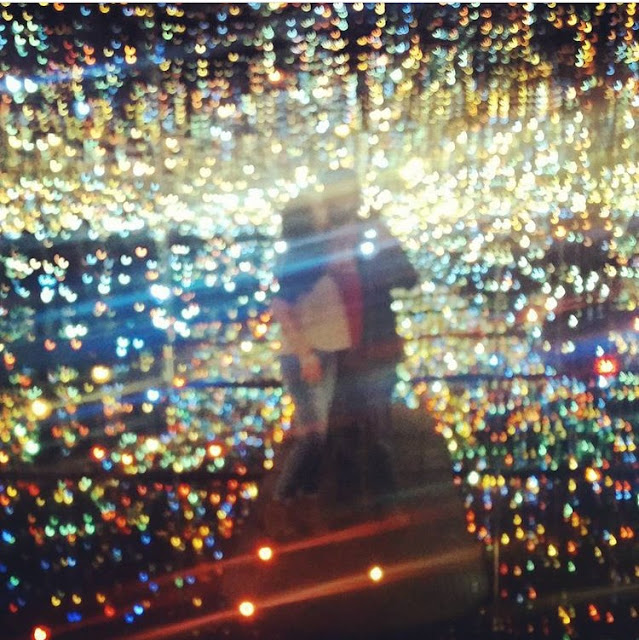 I really recommend checking this place out guys! It's very different and unique and you can't beat the price.