This year marked the 88th Annual Academy Awards! 88 is the year I was born and 8 is my lucky number so I figured something special might happen (spoiler alert...it did!). I write something every year about the Oscars and I also try to watch as many nominated movies as I can, but definitely the ones nominated for Best Picture, and this year is no different. So here goes...

Obviously, let's talk fashion first! Everyone looked so amazing and beautiful...especially my beau, Leonardo DiCaprio. These are my top fashion favorites of the night...


I have to admit, I was really looking forward to seeing Alicia Vikander's look tonight since I've been obsessed her with style all awards season, but I was a little underwhelmed by her look at the Oscars. Not bad, but still not that breathtaking.

And on a side note, has anyone checked Heidi Klum's head recently? She's been looking all kinds of sloppy on the red carpet recently, I definitely thought she would step it up for the Oscars at least.

Being in the diamond industry myself, I had to include my favorite jewelry looks of the night too!

There was a lot of buzz around the Oscars not having a more diverse group of nominees. I agreed somewhat, where I thought Will Smith should have been nominated and so should have Straight Out of Compton. I guess the Academy tried to make up for it throughout the show by peppering in a lot of jokes to combat the #OscarsSoWhite controversy? Chris Rock's monologue was actually funny in my opinion, but most of the jokes were trying to make light of "racist Hollywood", and though his jokes were bold, they were also borderline uncomfortable. It was apparent that everyone in the audience didn't know if it was okay if they laughed. I did, however, like Chris' nod that Michael B. Jordan should have been nominated, because lets face it, he should have. On the other hand, that introduction to Stacey Dash was god awful. Maybe I'm biased, but I'm having a hard time agreeing that any recent Oscars host has been better than Ellen!

Again, I watched all the Best Picture nominated movies this year, and also Joy and The Danish Girl. I had my opinions on who should win and I'm overall really pleased with the outcomes. After tonight, I'm definitely going to make an effort to watch Carol and Amy (Best Documentary Feature). Let's talk...

I'm really happy for all the Mad Max wins including Best Sound Editing, Best Sound Mixing, Best Makeup and Hairstyling, Best Production Design, Best Costume Design, and Best Film Editing. I think they were all deserved. Creating a futuristic movie that is to the caliber that Mad Max is hard to do and the people behind it did it really well.

I'm also very happy with Inside Out winning Best Animated Film, it was a great take on how our brains work and extremely profound for a film intended for a younger audience.
The only category I was in disagreement with was Best Original Song. I like Sam Smith and all, but Lady Gaga was definitely robbed of this award.

2. Girl Scout Cookies for the win! I can't decide if that was better than the pizza from Ellen's year of hosting, but either way, Girl Scout Cookies are a good crowd pleaser and I wouldn't mind getting my hands on some Thin Mints.

3. Jacob Tremblay and Abraham Attah standing on soap boxes to be taller while presenting for Best Live Action Short Film. I have yet to see Beasts of No Nation, but I loved Jacob in Room! 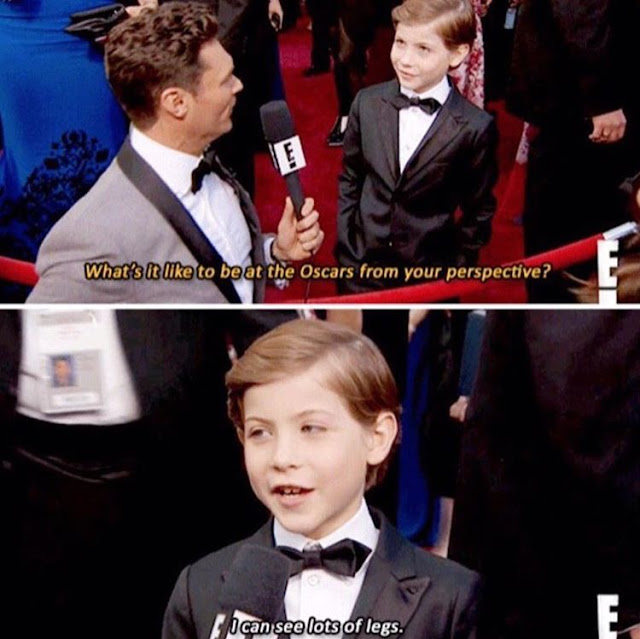 4. Joe Biden introducing Lady Gaga's performance of Till It Happens to You and empowering survivors of sexual assault.

5. Lady Gaga's performance!! What a show stopper, this was the ultimate highlight of the show, for me anyway. This performance was truly powerful and the inclusion of survivors of sexual assault on stage with her made it even more profound. Her passion in her craft is just amazing and brings forth emotion, as it did with the audience.

6. Alejandro G. Innaritu's speech upon winning for Best Director, which championed eliminating prejudice and promoting equality. It's long, but worth the watch.

All in all, I was very happy with how the Oscars were this year. From the winners, to the performances, and even the hosting, I thought it was fun and entertaining to watch. And I'm especialy overjoyed with Leo winning...I knew the 88th Academy Awards would be a lucky one! What did all of you movie lovers out there think of it? I hope you all enjoyed it and enjoyed reading my post. That's a wrap!

Posted by taltalsays&chardonnay at 11:47 PM No comments:

Last weekend, I ventured out to Long Beach for an event, and had heard great things about this cute place to eat called The Attic. It's nestled in a nice little area near downtown and has such a homey feel so I decided to try it out.

Walking in was like walking into a backyard barbecue at a friends house. It's really welcoming and cozy. I sat in the patio outside, which had comfy couches and multi patterned tables. It overlooked the street and the weather that day made it a perfect vibe. 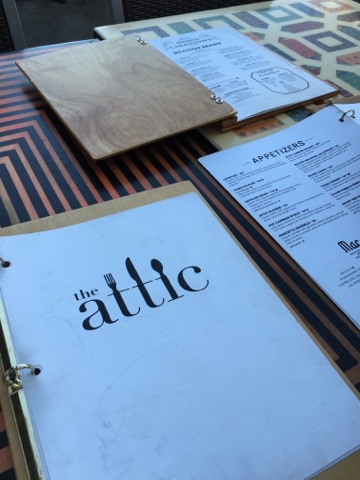 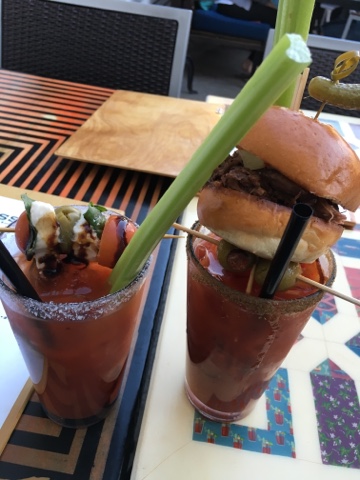 The star of the show, though, was what this place is known for...Mac and Cheetos! It doesn't get more decadent than this, people! A glorious cheddar and mozzarella macaroni and cheese topped with hot Cheetos! There are so many add ons you can get to it too. I added some bacon, but kind of regret not getting avocados too. If you're looking for even more decadence, you can even add a fried egg on top of it! 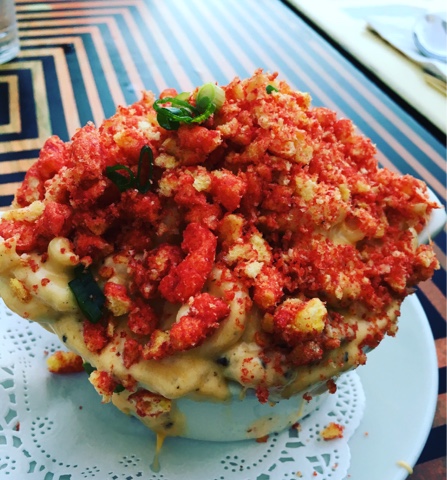 If you're looking for other comfort food dishes, I also recommend the chicken pot pie. The flaky crust on top of a hearty pot pie is just a feel good meal.

Honorable mention to the bison burger, which my boyfriend said tasted really good, but I'm just not a huge fan of bison.

Next time you're out in Long Beach and looking for a great place to comfort your foodie soul, try out The Attic, you won't be sorry! Happy eating!